What I'm Reading Now: The Captive Dove by John Ouellet 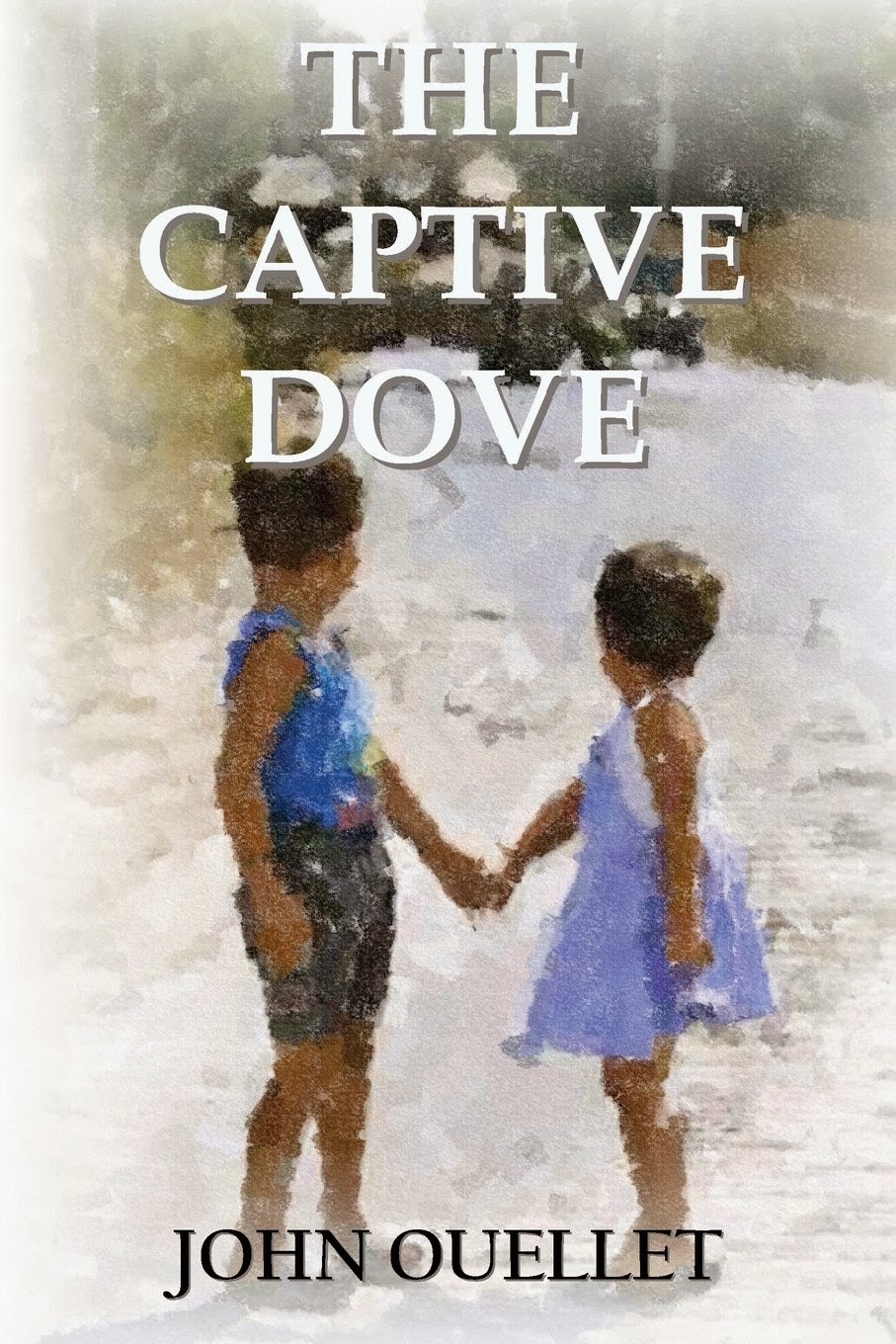 Published by: All Things That Matter Press, 2013
Available: Through Amazon or Barnes and Noble
Violence: This book contains violent images including bullying, fighting, detailed descriptions of head wounds inflicted during war, discussion but not description of sexual assault.
Age Appropriate: I'd be comfortable having my 10th grader read this.
Grade*: B

Mr. Ouellet contacted my book group wondering if we'd like to read his new release. He sent a free advance copy to me so I could evaluate it for the group. I like to support authors who are local and independent, like me. I also like the thrill of unearthing a new writer that I can introduce to others. Since Mr. Ouellet lives in Michigan, we will invite him attend the meeting and discuss the book with us. Bonus!

What it's about:
Joe (Nasser) and his sister Sue (Sureia) were sent to the West Bank to live with their uncle's family in the summer of 1964. Their parents feared the influence of the South Side of Chicago and their father wanted to make sure they learned about Islam and their heritage. The story follows Joe through his time in Palestine and how it impacted him into adulthood.

What I thought as I read:
The book is an interesting concept to start with, part of the new movement of creative non-fiction. Although it's told in the first person memoir-style and the events are true, they didn't happen to author.  In fact, Mr. Ouellet has never met Joe and Sue although he has spoken on the phone with Sue. Taped conversations were the basis for the book.

One of the challenges in memoir is telling the story in an effective manner and yet staying true to the events and the narrator. Time and again, I've seen authors get tripped up either by truth that is stranger than fiction or with the desire to stick to the absolute truth at the expense of the story.

Because this wasn't Mr. Ouellet's own story, he could have taken more creative license with the facts and built a more compelling narrative with deeper symbolism and themes. What did Joe learn after his journey over all? How does this story reverberate today? How does this conflict apply outside the Middle East? None of these question are addressed in the novel, but were absolute options based on the plot and characters.

The adherence to the absolute truth resulted in a book that, at 373 pages, was longer than necessary. There were parts that dragged and could have been shortened up or cut. Some of the descriptions of daily life in both Palestine and Chicago could have been deleted and there were characters that were described and added into the mix, but ultimately never went anywhere. They could have been dropped or consolidated.

Even though the novel is written in first person, because it was in past tense, there was room for an adult Joe to reflect more deeply on the events of his life. He does it to a certain extent, but I found it falling short and leaving me wanting more. A deeper understanding of the motivations of the main character, especially during his time in Chicago when he become involved with terrorists, would have made the plot stronger and would have bound the reader more tightly to the main character as well.

Summary:
Overall, this is a great story. It's an interesting perspective on an event that is still reverberating today. Many non-Arab people scratch their heads and don't understand the basis of the conflict between Israel and Palestine and why they can't "just get over it." Although this book is not political at all, it gives a glimpse into the attitudes that exist in that part of the world. Despite some of the issues noted above, it was never a chore to pick the book up. I would recommend this as a read.

*I'm transitioning to letter grades as I feel they give a more nuanced evaluation than the old five star method.

Email ThisBlogThis!Share to TwitterShare to FacebookShare to Pinterest
Labels: What I Am Reading Now

Michmoms: Sex and Violence in books and movies aimed at teens

It occurred to me after reading The Hunger Games trilogy and Divergent that a lot of parents were way more comfortable with their kids seeing violence in movies than sex. Check out my newest post at The Detroit News Michmoms blog to find out why.
Posted by Unknown at 7:08 PM No comments: