What I Learned from Nanowrimo

The race is run. December 1st marked the return to normal after a spectacular literary sprint conducted by writers all over the globe. National Novel Writing Month, AKA Nanowrimo, the challenge to write 50,000 words in one month, came to a conclusion November 30. Now my blogging drought is broken and I am engaging in some serious navel gazing along with most of the other participants.

The first question most will ask is: "Did you win?" My answer is no and yes. Did I write 50,000 words? No, I produced just over 30,000, so I'm not technically a winner.  There will be no t-shirt or confetti or even electronic props. I did, however, win in the sense that I finally got down the vast part of a novel I've been dabbling with for over two years and I learned quite a bit about "my process."

Jack started walking around in my head about two years ago. He was the result of an exercise during a writing class I was taking. "Who walks in the door? And what do they see? What do they feel about us sitting here looking at them?" the instructor, Gwendolyn Jerris, exhorted. That's when Jack, the cowboy transplanted from Texas to Michigan walked into my head wearing his stetson and cowboy boots. His Mama taught him manners, so he has stepped politely aside several times in the last few years when another character waved his or her arms around and shouted, "Ooo, ooo, ooo!" in a Horshack-esque ploy for attention. When that character has gotten his or her due, he always returned, quietly asking for his story to be told. Nanowrimo finally gave me the opportunity to focus exclusively on Jack and his story. I wanted to say, "Gave me the chance," rather than "opportunity" but it would be a lie. I've had the time since I left my job in April. What Nanowrimo did was give me the focus I needed to pound out about three quarters of the novel. I'm sad its over and now the impetus has to come from within me. I'm happy that I've spent November giving a great character his due and will continue to do so in December. The goal is to finish before the end of 2012.

In his quiet way Jack allowed me to find out who I am as a writer. Writers talk a lot about the differences in their process. We pace around like divas and require absolute silence, classical music, or new age. Our coffee must be hot, cold, or decaffeinated. We constantly ask other writers, especially those with an agent or a publisher, what their process is. To entice the muse to cross our threshold, we contort ourselves in so many crazy ways. I learned that the muse shows up as long as I'm sitting at my computer. Its amazing how she shows up when the goal is 1500 words, do or die.

When the muse enters the room, the very most important thing I do is shut up the The Writing W(b)itch. Her haranguing about dialogue, plot, and even grammar will drive the muse away. I find that I must stuff the W(b)itch into a box and not let her out until its time for revision. This means that I write a lot of dreck and I mean pages of it. I expect to toss at least a third of the novel and cut out at least one character. But until I'm ready to do that, The Writing W(b)itch just gets in the way of getting the story down on the page, something I mentally refer to as "Brain Splat." Now, many of my friends are diligent  plotters. They have everything planned out before they start to write. I'd love to be a plotter. It appeals so seductively to my organization gene. Its a complete waste of time for me. I've outlined this novel at least three times and as soon as I write three sentences I'm already off the outline. This time I decided to just go with it and lean heavily on "Brain Splat."

The Brain Splat Method made trying to write this novel chronologically very difficult. I really started losing steam in the middle. To mix things up I'm writing scenes as they present themselves to me rather than where they will fall in the novel. I've already written what I see as the end of the book. I've also written parts of the middle and recently another one presented itself to me where Jack gets back with his male lover, Marcus. I'll probably write that one too. It may or may not make it into the first draft.

See how I used the words "first draft" there? That's because what I'm producing right now is a rough draft, not suitable for eyes other than my own. Once I finish this rough draft, then I will try to use all those wonderful plotting tools like character analysis and beat sheets to whip this amorphous pile of brain mush into a first draft that will not embarrass me in front of my writing buddies.

In the end, as crazy as it was to try to write an entire novel in one month, it was a fantastic experience for me. I was able to get a lot of pages out, most of which are really, really bad. (I'm not fishing for compliments, they really are really bad). More importantly, I learned that my process is as individual to me as my fingerprints. I was able to spend time developing it and getting comfortable with it. Now its time to push forward and finish this rough draft so I can let the W(b)itch out of her box. 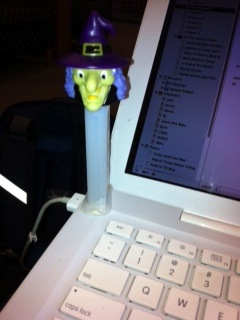 This is The Writing W(b)itch. I let her out of her box for this blog post.

Email ThisBlogThis!Share to TwitterShare to FacebookShare to Pinterest
Labels: update