Garden As Life: The Garden Renovation - In the Beginning

As most of you know, I stopped working at a traditional job this year in order to pursue writing as well as some of my other interests, one of which is gardening.  Every time I get out there and "dig" I am amazed at how the garden reflects our lives.  Not just in the big metaphysical "Circle of Life" ways, but also in the seasons of our individual lives.

My Friend (MF) asked me to take a look at her garden recently.  She complained that she had alien species with huge spikes on them invading her space.  I am not an expert by any stretch of the imagination, but I suspected thistles.  We struck a deal that if I cleaned her garden up, she would repay me in kind with massages and astrological charts.

A couple years ago, MF went through a professional upheaval that involved betrayal and rejection by someone who had mentored her for several years.   The fall out was naturally very emotional and it took her months to recover her equilibrium.  This is when the thistles had started to appear in her garden.  Not a year later her ex-mentor was shown as having used his influence to take advantage of others in the organization financially and sexually.  Although he was driven out, the implosion of this entity ended up on MF's doorstep as she was still in contact with a lot of people from this particular group.  The thistle seeds that had been scattered the prior year by just a few plants, now sprouted with a vengeance invading her peace of mind as well as her garden.  People who had rejected her now sought her out to pour their hearts and pain out to her.  Many online groups had venomous discussions full of anger and finger pointing.  MF was right in the middle of it.  And she was sick of the weeds in her life and her garden.

My first foray involved thistles three feet high with three inch thorns.  I wish I had taken pictures of them.  I almost expected them to object as I pulled them out of the ground.  As I worked through her long neglected garden pulling weeds, it became clear, that weeding alone was not going to really help this garden.  Hostas planted in very hot sun were showing heat stress and burned leaves.  Day lilies were so overgrown they had stopped flowering.  A Russian sage and gaura butterfly plant looked like refugees huddled against the sidewalk, trying to find new space.  Each bed was going to have to be cleared, compost worked in, plants divided and then replanted.  I trooped into MF's kitchen to tell her the bad news.

"I've made a decision," MF said before I could deliver my message.

"You've decided to burn the garden and start over?" I asked.

She looked at me a bit funny, "No, I've decided to exit these online groups.  They are just negative and keep bringing up the past in a way that doesn't benefit me."


"I'm glad to hear it," I told her.  "I agree that reopening old wounds is not the best way forward at this point.  Listen, speaking of new beginnings, let me tell you what the garden really needs to flourish."  I explained the situation and she agreed to let me do a full garden renovation.  It struck me at how parallel her decisions were.  The decision to renovate the garden, the decision to renovate her life.  So this is the first post in the journey that is my first garden renovation.  I have some before pictures of the first bed I have started work on. 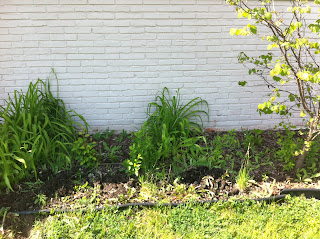 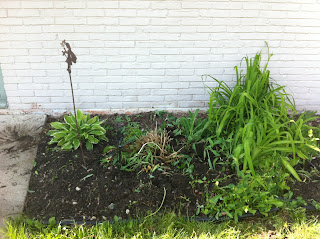 I have since pulled all the plants out, worked in some compost, and then replanted the bed.  This is what is looks like now: 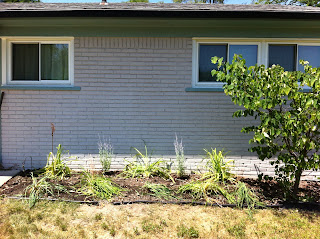 I divided the tiger lilies, planted two new Russian sages in between them, moved some stella dora day lilies and iris to the bed as well.  That is an Eastern Redbud on the right. We are in the middle of a drought not seen since the 1950's so everything is looking a bit worse for the wear.  I am in the process of drawing up a permanent plan for this bed as there will be no winter, late summer or fall interest based on the plants that are currently in it.  MF is also not a happy gardener, so anything that goes into the garden has to be self sustaining and not particularly invasive.

Next up: What Shiva the Destroyer has to do with gardening.

Posted by Unknown at 3:10 PM No comments:

Email ThisBlogThis!Share to TwitterShare to FacebookShare to Pinterest
Labels: Garden as Life

Here is a new blog post type: the bonus round.  This is when something comes upon me and I must blog about it beyond my usual schedule ("What schedule?" you ask.  Well, that's another post.  I'm working on it.)

One morning not too long ago, I sat twitching at the dining room table in the throws of a hormone induced anxiety attack of epic proportions.  "Let me catch up on my emails,"  I thought.  Because, really, when you are suffering from heart palpitations, what else should you do?   My sister sent me this blog post weeks ago with the message, "This is so funny.  A client shared it with me and I thought you would enjoy it.  I was laughing so hard I was crying.  Ron (our brother) loved it too."  I figured what the hell and hit the link (you should, too).  I knew I had come completely unglued when I realized that I was sitting at the table, alone, eating egg salad on egg and onion matzoh, laughing like a lunatic.  Tears rolled down my cheeks.  I had to stop reading several times.  I came close to falling off my chair.  I want a five foot tall metal chicken to leave on my friends' stoops.  The chicken possibilities were endless.  Then it hit me, I had a chicken.  It has been decorating my garden for the past couple of years. 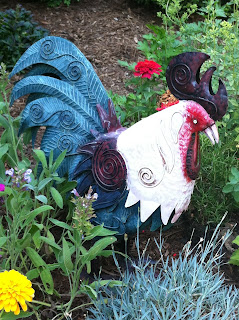 Sure, it is only about two feet tall, we have not named it, and it won't cut you, but it is my own personal chicken.  Every time I look at it, I laugh and that my friends is a gift.

Posted by Unknown at 2:03 PM No comments:

On the Cusp: Bereft

Most of you already know that The Girl is touring Germany and France with the Blue Lake International Youth Symphony Orchestra.  How do I feel about her first big trip away from home?  My newest post on Greenspotblue will bring you up to speed.  Click here to read it.
Posted by Unknown at 8:25 AM No comments: