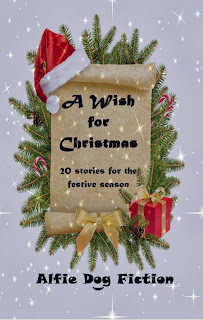 Today fellow "A Wish for Christmas" author Alan Jankowski stopped by to talk about all things Christmas. As one of two gentlemen included in the anthology, Alan has a lot to say about writing and Christmas. Here goes!

1. Your story, "His Christmas Wish," was included in Alfie Dog's holiday collection, "A Wish for Christmas." What was your inspiration?

My story "His Christmas Wish" is actually the first 3300 words of a longer story called "Her Christmas Wish" which was written for an erotic story contest on Lush Stories.  I had started out writing by writing erotic stories back in 2009, and a story of mine came in third in their Christmas contest in that year.  The winner was a very romantic, tear-jerker written by a retired journalist, complete with returning war hero who adopts his new girlfriend's kids.  I told him it read like a Lifetime movie.  The following year, I thought to myself what I could possibly come up with that might be equally heartstring tugging.  I half jokingly thought about a story with a little boy in a snowstorm looking for a lost puppy.  The idea seemed a bit over the top at first, but after thinking about it a while, I figured as long as no children or animals were harmed in the process, I just might be able to pull it off.  Anyway, I wrote the intro which I called "His Christmas Wish" on December 20, 2010 and wrote up the rest of the story the following night.  If you read the story in this book, and think that Gary and Pam are destined to get together, you are right...they do in the longer story.  The longer story didn't win anything in the contest that year, but I've had some success with the shorter, non-erotic version.  This is the third time this story will be in print btw., the first time being in a Christmas anthology released in 2011, and now out of print.

My favorite holiday memories would have to being going over my grandmother's house when I was a kid.  It was nice getting together with the relatives at Christmas time.  My grandmother Mary Jankowski lived to be 102 btw.

I can't say we have any ironclad traditions anymore.  I don't see the relatives as much as when I was a kid, for instance.

4. Where can readers find more of your work?

Btw, I'm most famous for one poem, and here's a short interview video of me talking about it which appeared on a number of Gannett news sites on the East Coast of the US on Sept. 11...
http://www.mycentraljersey.com/article/20130911/NJNEWS/130911002


Remember folks, "A Wish for Christmas" can be purchased on Amazon. For non-kindle users, Smashwords is a good option as well as going right to the source and downloading from Alfie Dog.